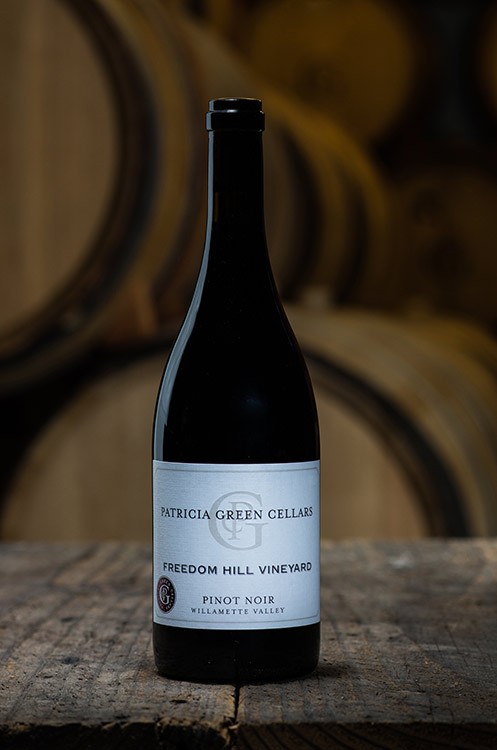 Site History: The vineyard was established in 1982 by the people who still own and manage it to this day: Dan and Helen Dusschee. While they may not have realized it at the time, they were settling onto a site destined to be one of the top Pinot Noir vineyards in the state of Oregon. Their rigorous and professional approach to the management of the vineyard has brought about that greatness, and even though the vineyard suffered through a scourge of phylloxera replanting’s, expansion of the site has shown that there is a distinct and indomitable terroir.

Site Characteristics: Freedom Hill Vineyard lies toward the eastern edge of the Coast Range Foothills. While associated geographically with the Eola Hills, the site lies south and west of the border of the Eola-Amity Hill Appellation outside of the town of Monmouth. The vineyard is planted on a marine sedimentary type of soil known as Bellpine. The vineyard is also located just south of the Van Duzer wind corridor which allows for more consistent average temperatures due to a lack of afternoon and evening offshore breezes rolling through.

PGC Blocks: This is a bottling largely based on two Dijon 115 blocks but with fruit from other interesting and diverse sources to round it out into a unique and diverse Freedom Hill Classic bottling.
• Coury Clone: .85 acres. 2010 planting. California heritage clone with an unusual growing pattern that best suits a four fruiting cane trellising system. Clusters are extremely small, and fruit is very intense.
• Dijon 115 Heritage Rows 1-25: 1.35 acres. 2007 planting. Comes in after Dijon 115, 777 and 667 in Oregon so not particularly heavily planted but does well (the Estate Vineyard, Etzel Block bottling is largely Dijon 114) in Oregon mixing heavy fruit with earthy elements.
• Dijon 115 Heritage Rows 60-81: 2.69 acres. While a Dijon clone, this is better known and far more widely planted in California than Oregon. Bountiful clone with small clusters and dynamic fruit profile.
• Pommard: 1.91 acres (less than half producing). 1978 planting. Interesting and unique clone set into a swale with cooling influences abounding. Extremely short plants and tiny clusters.
• Wadensvil East Liberty Block: .2 acres. 2002 planting. Huge mix of at least seven and maybe up to nine different clones. Selection unknown.
• Wadensvil Heritage Block: 2.03 acres. 2006 planting. California heritage clone. Tucked into the highest portion of the vineyard along the eastern tree line. Variable cluster sizes and shapes. Produces well and tends toward highly pigmented and structured wines.
Farming Practices: Since 2013 Freedom Hill Vineyard has been moving diligently and consistently from conventional farming practices to organic farming. While not 100% turned to organic practices it is closer to that than it is too so-called “sustainable farming.” Great attention has been paid to specific cover cropping, foliar feeding, and cultivation. The result is a healthier vineyard with a greater range of blocks producing single vineyard quality style wines.

Winemaking: Fermentations were managed by a combination of pumpovers early in the process and exclusively prior to fermentation beginning as well as pigeages to ensure gentle handling, extraction, and delicate tannin construction. Cold soaks were 3-4 days except for the Pommard which was between 6-7 days. Full fermentation from beginning to pressing was 16-17 days except for the Pommard which was 20 days. 24-48 hour settling prior to being racked to barrel. All wines on full lees until assemblage for bottling. Bottled without fining or filtration.
Barrels: This 45-barrel bottling consists entirely of neutral barrels except for 2 new barrels used on the Dijon 115 Rows 1-25 and 10 once filled barrels used on the East Liberty Wadensvil and Pommard. Wine was in barrel until late August and bottled in late September. Bottling consists of:
• Coury Clone: 8 barrels
• Dijon 115 Heritage Block Rows 1-25: 2.5 barrels
• Dijon 115 Heritage Block Rows 60-81: 14 barrels
• Pommard: 2 barrels
• Wadensvil East Liberty Block: 13.5 barrels
• Wadensvil Heritage Block: 5 barrels

Notes: This bottling represents one of our highest QPR wines each and every vintage. Because we have fully committed to this site, we take more acreage of Pinot Noir than any of the other wineries that pull fruit from here. Because we take a lot by both volume and diversity of blocks and clones and because we choose to bottle some barrels from some of the individual blocks, we can create a larger bottling that is still full of Freedom Hill goodness while coming in at a price atypical of Freedom Hill Vineyard made by any other producer. We are proud to be able to offer a Pinot Noir from one of Oregon’s premier vineyard sites at a price that many entry level, blended Pinot Noirs go for. Freedom Hill is known for dark, elaborately pigmented wines with a wealth of fruit, generous mouthfeel and a dollop of tannins that gives the wine framework and dimension. While not a lightweight this is far from some bruising or sultry wine. This has intense red/black fruits, earthy spices and just a little bit of grip. This will be excellent in its youth but will have solid footing and great upside for well over a decade. This finished with a TA of 6.0, a pH of 3.47 and was bottled with under 25 ppm free SO2 and less than 70 ppm total SO2.