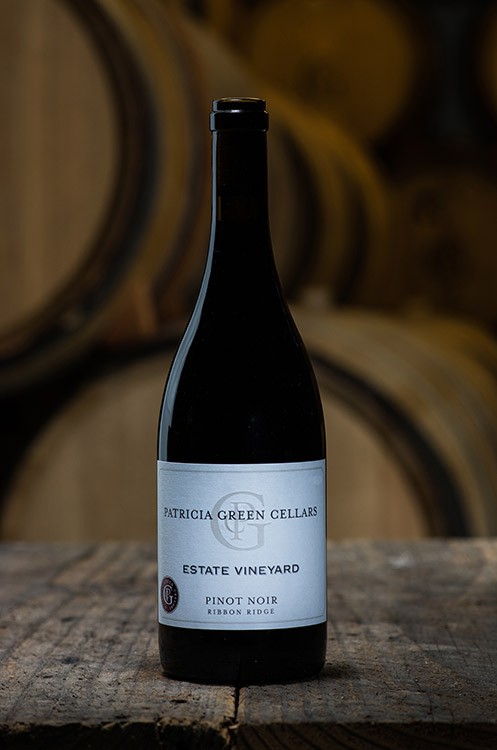 Site History: The vineyard’s original planting dates back to 1984, making it the second oldest established vineyard in what is now the Ribbon Ridge AVA. Plantings of entire blocks have happened in 1986, 1987, 1990, 1997, 1998, 2000, 2001 and 2010. The site includes 25.5 acres of Pinot Noir (20 acres of Pommard, 3 acres of Dijon 114, 3.1 acres of Wadensvil and 1.4 acres of Coury Clone), 2.5 acres of Sauvignon Blanc and 2 acres of Chardonnay (Dijon 76 and 96). Patricia Green Cellars purchased the property in July, 2000. About 20 acres were planted at that point, including Pinot Gris, which was mercifully grafted over to Pinot Noir in 2002. The vineyard houses the oldest Sauvignon Blanc vines in the Willamette Valley. It has also produced the only Pinot Noir to receive a score of 100 from a major, national wine publication.

Site Characteristics: The vineyard starts, lightly sloped in the middle/bottom of the hill at the winery and moves quickly up a steep slope and eventually all the way to the top of the hill where it falls of 360 degrees, planted in every direction. The blocks represent palpable differences in aspect, elevation, clone and vine age. This has allowed for numerous bottlings based upon unique wine characteristics making it the vineyard with the single most Estate Vineyard Pinot Noir bottlings in the state of Oregon.  The vineyard has a thin layer of extremely dry and silty topsoil that sits upon mostly a hill of shale and sandstone. Toward the very bottom of the site some deeper, very soft blue-gray clay becomes the subsoil. It is highly drained, erosion-prone soil. The vineyard is farmed entirely organically and is dry farmed. Large, deep stands of trees on the east and west sides of the property frame the vineyard, provide shade at certain times of they day and act as a home for a variety of woodland creatures including mountain lion, bobcat, black bear, coyote and deer. Unlike vineyards even 2-3 miles to the east, the Estate Vineyard receives very little wind during the growing season. The planted portion of the property ranges from 235’ to around 485’.

The Blocks: The vineyard is divided into seventeen individual sections that are all picked, fermented and barreled separately. The primary blocks of the Estate Vineyard bottling are the Fuego Block (1990 planting of Pommard), Cougar Block (1998 Pommard), the Grapes of Wrath and Last Blocks (both 2000 plantings of Pommard), the West Etzel Block (2001 planting of Dijon 114) and the Ceremony Block (2000 planting of Pommard and Wadensvil). These are spotted over the entirety of the vineyard making this an all-encompassing Estate bottling.

Farming Practices: We have done the management of this property internally since we purchased it in 2000 with the exception of 2014 and 2015 when Sterling Fox’s management service did the work. Also, at that time, the vineyard was switched entirely to organic farming practices and remains so to this day. The vineyard has always been dry farmed.

Picking Dates, Tonnages, Tons/Acre: Due to the size of the size of the site and the breadth of differences between blocks the picking schedule is vast. In 2021 it ranged from the Fuego Block being picked on September 7th to the Grapes of Wrath Block being picked on September 25th. Tonnages vary widely as well but in 2021 averaged right at a very healthy and bountiful 3.0 tons/acre.

Vinification: Most fruit in this bottling was entirely destemmed, but about 30% of the barrels were sourced from fermenters that contained between 50-60% whole clusters.

Winemaking: Fermentations were managed exclusively by pigeages to ensure gentle handling, extraction and delicate tannin construction. Cold soaks were generally 4-5 days across all the fermenters. Full fermentation from beginning to pressing ranged from 16-19 days. A 48-hour settling of pressed wine occurred prior to being racked to barrel. All wines were on full lees until assemblage for bottling. Bottled without fining or filtration.

Barrels: This 82-barrel bottling consists of 25 new barrels (30%), a combination of once and twice-filled barrels (12%) and a large selection of neutral barrels (58%). Wine was in barrel until late July and bottled in late August allowing for around 10 months in barrel.

Notes: The Estate Vineyard bottling exists because it is both delicious and unique, but also because it shows a particular aspect of this vineyard and the Ribbon Ridge AVA as a whole. This bottling is made up nearly entirely from vines with 12-24 years in vine age, with a large amount being right at 22 years. We have discovered that at around 25 years of vine age we often see a change in the vines’ nature as they become bigger and healthier plants with deep root systems. Before this happens, the vines tend to produce fruit that is bigger, bolder, plumper and more succulent at a young age than the older vines’ wines. Therefore the Estate bottling is the richest and most precocious of all our Estate Vineyard Pinot Noirs. The fruit will have a black/blue tinge to it, the mid-palate should be generous and supple and the finish should have some structure in a fairly generous manner. Despite what might be described as a more “obvious” style bottlings dating back to 2003 and 2002 are showing incredibly well at this point. The wine finished with numbers of a TA of 5.3, a pH of 3.61, a free sulfur level below 25 ppm and a total sulfur below 70 ppm.