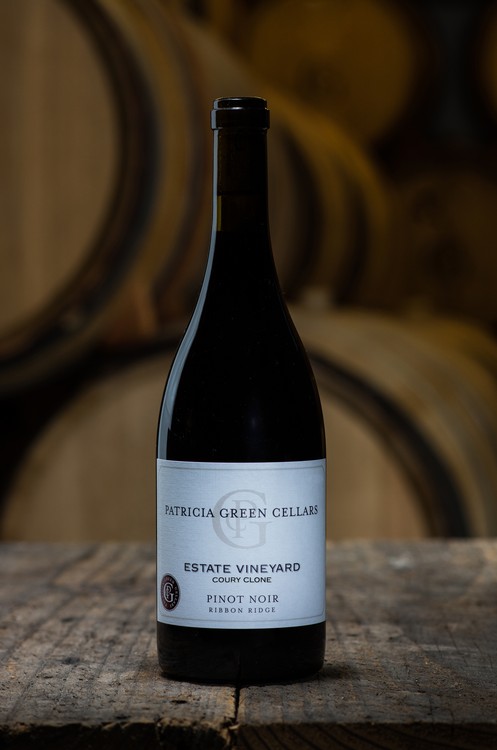 Site History: The vineyard’s original planting dates back to 1984, making it the second oldest established vineyard in what is now the Ribbon Ridge AVA. Plantings of entire blocks have happened in 1986, 1987, 1990, 1997, 1998, 2000, 2001 and 2010. The site includes 25.5 acres of Pinot Noir (20 acres of Pommard, 3 acres of Dijon 114, 3.1 acres of Wadensvil and 1.4 acres of Coury Clone), 2.5 acres of Sauvignon Blanc and 2 acres of Chardonnay (Dijon 76 and 96). Patricia Green Cellars purchased the property in July, 2000. About 20 acres were planted at that point, including Pinot Gris, which was mercifully grafted over to Pinot Noir in 2002. The vineyard houses the oldest Sauvignon Blanc vines in the Willamette Valley. It has also produced the only Pinot Noir to receive a score of 100 from a major, national wine publication.

Site Characteristics: The vineyard starts, lightly sloped in the middle/bottom of the hill at the winery and moves quickly up a steep slope and eventually all the way to the top of the hill where it falls of 360 degrees, planted in every direction. The blocks represent palpable differences in aspect, elevation, clone and vine age. This has allowed for numerous bottlings based upon unique wine characteristics making it the vineyard with the single most Estate Vineyard Pinot Noir bottlings having come from it in the state of Oregon. The vineyard has a thin layer of extremely dry and silty topsoil that sits upon mostly a hill of shale and sandstone. Toward the very bottom of the site some deeper, very soft blue-gray clay becomes the subsoil. It is highly drained, erosion-prone soil. The vineyard is farmed entirely organically and is dry farmed. Large, deep stands of trees on the east and west sides of the property frame the vineyard, provide shade at certain times of they day and act as a home for a variety of woodland creatures including mountain lion, bobcat, black bear, coyote and deer. Unlike vineyards even 2-3 miles to the east, the Estate Vineyard receives very little wind during the growing season. The planted portion of the property ranges from 235’ to around 485’.

The Block: In the spring of 2000 we took over the farming of what is now our Estate Vineyard from Autumn Wind Winery and Vineyard. Even though the purchase of the property and business would not occur until later that year we were entrusted with running the operation as if it were our own already. The vineyard was only around 22 acres at the time with a good deal of plantable land available. There were also areas that needed to be addressed. This block was one of those. This was originally planted in 1985. It is on a very steep facing at the apex of the vineyard’s hillside. The terraces that had been built to account for the hill’s grade were collapsing making tractor work hazardous. On top of that years of soil neglect had created an extremely untenable growing environment for the plants. We decided to tear this section out and start again. At this juncture Dijon clones were quite fashionable (not they are not now, just more so in an outsized sort of way back then) and since the vineyard was solely Pommard and Wadensvil we decided to plant Dijon 777. The decision never panned out. Despite having the Etzel Block to its west, the Wadensvil Block to the north and the Hallelujah Block (the largest portion of the Estate Old Vine) this block never produced wine anywhere near the quality of its neighbors. For 15+ years we saw harvests produce wines that usually were scheduled for our Willamette Valley bottling rather than something more unique and individual. While clonal makeup is not the defining character of terroir it is an aspect and in this case, we felt that aspect was holding things back. In the spring of 2019, we traded some vineyard management expertise for cuttings off our block of Coury Clone at Freedom Hill Vineyard. Given our success there and at Hyland Vineyard with this unique, Oregon-based clone we felt like we could maximize the setting. In one vintage, not counting the smoke taint-befouled 2020 vintage, we found that we were proven correct. More good things to come from this interesting part of our Estate!

Farming Practices: We have done the management of this property internally since we purchased it in 2000 with the exception of 2014 and 2015 when Sterling Fox’s management service did the work. Also, at that time, the vineyard was switched entirely to organic farming practices and remains so to this day. The vineyard has always been dry farmed.

Vinification: Two fermenters, one a 1.75 ton and one a 2.5 ton, were used with the smaller fermenter using exclusively destemmed fruit and the larger done with 33% whole clusters.

Winemaking: Fermentations were managed exclusively by pigeages to ensure gentle handling, extraction and delicate tannin construction. Cold soaks lasted for 4 days for both fermenters. Full fermentation from beginning to pressing lasted 18 days. A 48-hour settling of pressed wine occurred prior to being racked to barrel. All barrels were on full lees until assemblage for bottling. Bottled without fining or filtration.
Barrels: This 9-barrel bottling consists of 4 new Cadus barrels (44% and 5 (56%) neutral barrels. Wine was in barrel until late July and bottled in late August allowing for around 10 months in barrel.

Notes: The Estate Vineyard bottling exists because it is both delicious and unique but also because it shows a particular aspect of this vineyard and the Ribbon Ridge AVA as a whole. We have been anticipating this wine for over two years since we lost the first harvest in 2020. We feel that our expectations have been matched. The combination of our site’s soil profile (marine), the steep east facing hillside and the unique qualities of Coury Clone all show up in ways that give this wine the unique expression we thought this block had lingering in it, unrealized by the Dijon 777 planting. This is the most crystal clear and red-fruited wine coming off the vineyard, even more so than the adjacent Wadensvil Block. The fruit is intense and sweet but the acidity allows for the brightness to dominate the palate giving the wine delicacy and lift. The familiar Coury Clone notes of orange pekoe tea leaf make an appearance and will likely become more prominent as the intensity of the primary fruit settles in with some bottle age. The tannins only appear at the end, providing a stronger grip than the wine’s more demure nature suggests and giving the wine length and dimension. This is very stylish and a wonderful, unique addition to the Estate Vineyard corral of wine. The wine finished with numbers of a TA of 5.7, a pH of 3.49, a free sulfur level below 25 ppm and a total sulfur below 70 ppm.