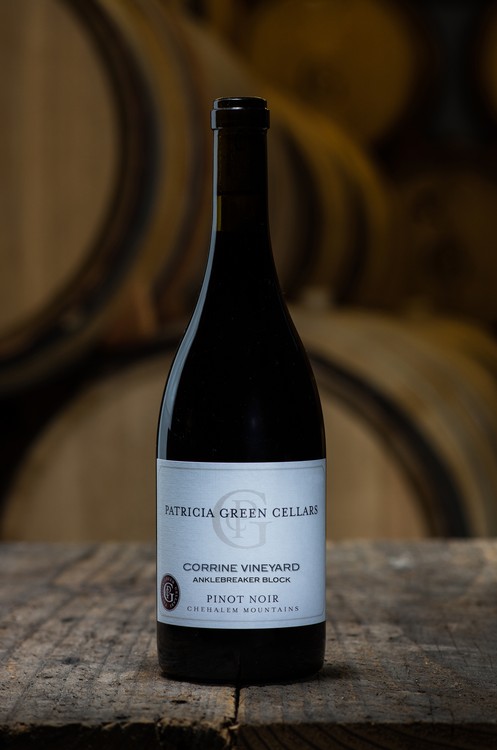 Site History: This vineyard was originally a portion of a larger vineyard known as Jacob-Hart Vineyard. This was owned and planted by Jan Jacobsen and Paul Hart, the founder and owners of Rex Hill Winery. In 1988 they began planting this vineyard off of Kings Grade Rd. After they sold Rex Hill in the early 2000s to A to Z Winery they still retained ownership of the vineyard. In the mid-2000s they began selling off the larger site as smaller, individual sections of vineyard. In 2007 John Olenik purchased the lower portion of the site. In 2009 I visited the vineyard with him in February while Patty was on a work trip. We were initially offered and took the 2.7 acre block of Wadensvil that is at the top portion of the site. I told John it looked okay and when Patty got back I would talk it over with her and get back to him. Upon returning to the winery I called her and said, “You are not going to believe the section of vineyard we just got offered!” John expanded the vineyard, nearly doubling the planted ground acreage. After the 2018 vintage, at the behest of his wife, he sold the vineyard to Cooper Mountain Winery.

Site Characteristics: Just outside of the Ribbon Ridge Appellation to the east is a contoured hillside that has a bit of a banana belt characteristic to it that separates and distinguishes it from most of the rest of the large Chehalem Mountains AVA. Corrine Vineyard sits nearly smack dab in the middle of this south facing hillside. The vineyard sits on the same type of thin marine soil as our Estate Vineyard. The west-facing and relatively exposed vineyard lies below Lia’s Vineyard and near sites such as Adams and J. Christopher Estate. The vineyard cascades down the hillside but has undulating folds to it that creates contour and gives unique characteristics to small sections within the 25-acre site. The initial block we received fruit from was 100% Wadensvil clone planted in 1991. We also receive a block toward the bottom of the vineyard known to us as The Anklebreaker Block, which is a 2007 planting of Pommard in a uniquely rocky section of the vineyard. The entire vineyard is incredibly diverse in terms of aspect, elevation and soil type with the amount of ancient flood and landslide deposited rock. This vineyard while just outside of Ribbon Ridge to the east sits in a little bit of a banana-belt that gets decidedly warmer and more consistently still than our Estate site just a few miles to the west. This site has a stillness and quietness to it that are quite enjoyable and palpable and it seems to resonate in the wines as they tend toward full, solid, dense wines that are more thought provoking than provocative.

The Block: This block carries the most unique name we use on a bottle because it is a truly unique section of vineyard. At some point in the distant geological past the upper hillside on which this vineyard sites experienced a violent landslide, cascading untold tons of rocks down the slope. By whatever quirk of topography this particular block was the end recipient of the largest portion of the basalt landslide. It is strewn, both on the surface and deep into the soil, with brick sized rocks. This makes for a particularly troublesome walk through the vines (hence the name)! However, the impacts are beyond sprained ankles, scuffed knees and wounded pride. The rocks create a difficult growing environment. In the 12 vintages we have had this section we have seen the vines deal with the hardscrabble in which they are planted. For four vintages (2013-2016) we did not bottle this wine due to the stress factor that was impacting the plants and the wine. A second aspect is that the rocks hold solar energy to a far greater degree than would bare dirt, grass or a cover crop. Therefore, this block has a higher ambient temperature than blocks adjacent to it due to the rocks putting out rising heat during the night. This is a truly tricky and unique ground in which to grow Pinot Noir!

Farming Practices: Corrine Vineyard was purchased by Cooper Mountain Winery in 2019. They have aggressively moved from sustainable farming to biodynamic principles with a stop in between of normal organic level farming which is where we are at right now. All Patricia Green Cellars sites are dry farmed.

Winemaking: Fermentations were managed exclusively by pigeages to ensure gentle handling, extraction and delicate tannin construction in a situation where tannin largesse is the norm. There were 5 fermenters in total. 3 of the fermenters were done with 50% whole clusters and 2 were entirely destemmed. Cold soaks were generally 3-4 days although a couple of the 50% whole cluster fermenters lagged a day or so behind at the outset. Full fermentation from beginning to pressing was 16-17 days. 48 hour settling prior to being racked to barrel. All wines on full lees until assemblage for bottling. Bottled without fining or filtration.

Barrels: This 12-barrel bottling consists entirely of neutral barrels with the exception of 3 new barrels (25%).

Notes: In a cellar where “place” is paramount this bottling is perhaps the Pinot Noir the best shows the attributes of from where it lives. This is not an easy wine and it is very likely not a wine either for everybody or even a majority of people. This is a dark and savory Pinot Noir with the sort of tannin structure one would expect from vines growing in something akin to a quarry. That is, however, why it is glorious for those that want something tougher, wilder and completely different than the vast majority of Pinot Noirs made anywhere in the world. This finished with a TA of 5.8, a pH of 3.55 and was bottled with under 30 ppm free SO2 and less than 75 ppm total SO2.